Walking in a buried city 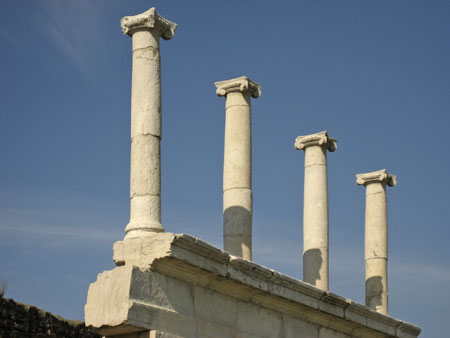 When Vesuvius erupted on August 24, 79 (CE), Pompeii, a vibrant city of around 20,000, as well as nearby Herculaneum and Stabiae, were buried in volcanic ash. We have an eyewitness account of what must have been an experience terrifying beyond measure. Pliny the Elder, who was commanding the Roman fleet stationed in the Bay of Naples, saw it happen. Alerted by his sister to — as his nephew writes several years later to Tacitus — “a cloud of unusual size and appearance,” Pliny decided to set sail with the fleet for a closer look and to rescue as many people as possible. In fact he, himself, perished on the shore. “When daylight returned on the 26th, two days after the last day he had been seen,” writes Pliny the Younger, “his body was found intact and uninjured, still fully clothed and looking more like sleep than death.” The cities remained buried until excavations began in 1748.

I’d seen pictures and documentaries, looked at Web sites, and read the guidebook. I’ve stood on Hadrian’s Wall. I’ve seen the stunning Pont du Gard. I’ve seen Roman remains and amphitheatres in England, France, Yugoslavia, and Italy. But nothing could have prepared me for the reality of Pompeii. You’re not seeing just one building or structure (however impressive); you’re walking along the streets of what was once an entire Roman city. You’re going into houses people lived in and shops where they bought food—complete with intact mosaic counters and deep tubs that would have held olives. You’re seeing the sidewalks they walked on and the public water fountains, fed by an aqueduct system that is surely one of the wonders of engineering, that they used on a daily basis. You’re touching stones they touched and looking at frescoes they commissioned as decoration for their villas. 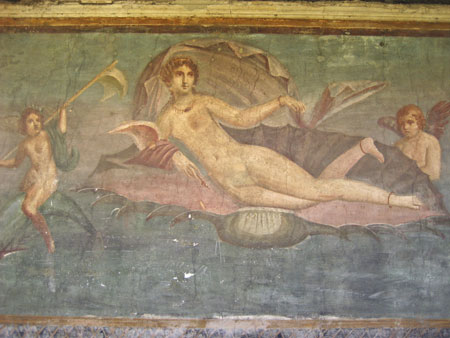 And everywhere you look, you know that you are seeing what was, for so many terrified people, the last thing they would ever see. I found it breathtaking and very moving.

I don’t know who this chap is, but his picture was all over the place in Lille. I don’t like graffiti, but I do like collections of affiches like these. They seem to me to be quintissentially European. Here are some more. 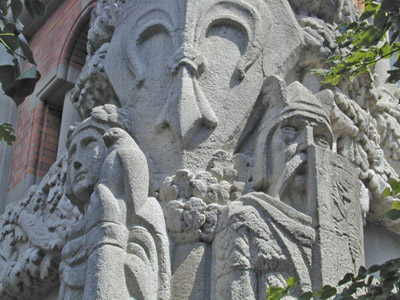 Here are the patron giants of Lille, Lydéric and Phinaert, supporting the tower of the Hôtel de Ville. According to legend—and I hope Elisabeth and MLL will put me right if I haven’t got the facts straight—in the year 620, a prince named Salvaert, fleeing an insurrection with his pregnant wife Ermengaert, was ambushed by Phinaert, a bandit lord. Salvaert was killed, but Ermengaert escaped and was taken in by a hermit. She gave birth to a son, Lydéric. When Lydéric was 20, he sought out Phinaert, challenged him to a duel, and defeated him. The King of France gave Phinaert’s lands to Lydéric, who founded the city of Lille.

There is apparently a wonderful view of the city from the tower, but it wasn’t open the day we were there. We had to content ourselves with looking around inside, where we found two more huge effigies of Lydéric and Phinaert in the auditorium.

This building in Lille reminded me of the Flatiron Building in New York City, famously photographed in 1903 by Alfred Stieglitz.

I wonder if Elisabeth or MLL knows anything about this building. I would love to see one of the apartments (I assume it’s an apartment building). I imagine them as very elegant.

The art of the swimming pool

I have never seen anything like these wonderful petunia pillars before. They are in Roubaix, which is 20-minutes or so away from the center of Lille on the excellent automated métro. Roubaix was an important textile manufacturing town in the 15th to 19th centuries

But the main reason to go there today is to visit La Piscine. 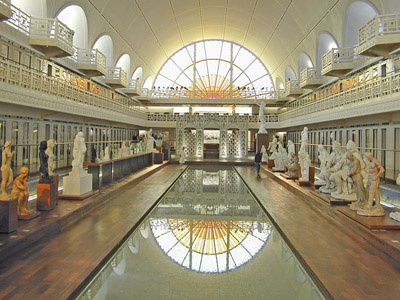 Originally an Art Deco swimming pool, it is now the Musée d’Art et d’Industrie. The old pool is a gallery of 19th and 20th century sculpture. The tiled edge of the pool is still visible behind the statues. The stretch of water in the middle is about three inches deep.

The old shower stalls and changing rooms have been turned into display cases for—among other things—the splendid displays of textiles and related items, and the wings that made up the municipal bath house and once contained bath tubs now house the fine arts collection. 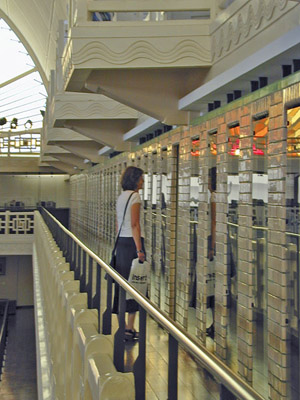 To remind you of this wonderful building’s past, every so often, you hear a couple of minutes of taped shrieking and splashing. 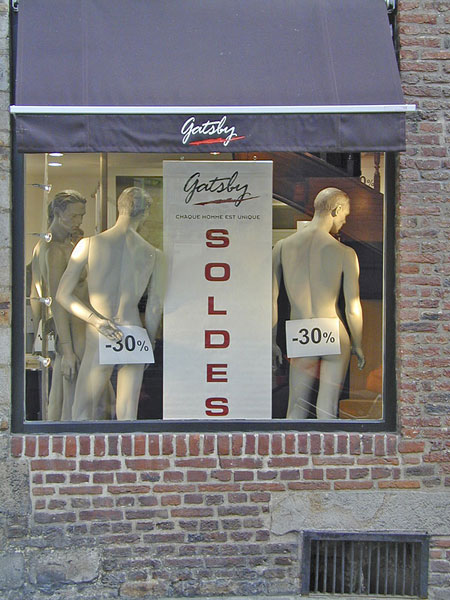 I was a teenager when I first started to travel out of England, where I grew up. I didn’t care about traditional souvenirs; one of the coolest things for me was to come home with a tube of toothpaste of an unfamiliar brand that said it was “dentifrice” or a bar of soap that called itself “sapone.” The ultimate in cool was using foreign, and therefore exotic, products.

Now the same stores and the same products are everywhere, and I find it very disappointing. It’s not that anyone makes me shop at Tesco in Prague or eat at McDo (God forbid!) in Paris or buy Colgate toothpaste in Venice; it’s that I don’t want it to be even a possibility.

Sales were going on while my friends and I were in Lille (carefully avoiding Euralille for fear of finding a WalMart), and I’m happy to say that the exotic kicked in for me because the window displays were far more creative and daring than anything you’d be likely to see in the United States. This one was my favorite: At Gatsby’s “chaque homme est unique.”

The architecture of commerce 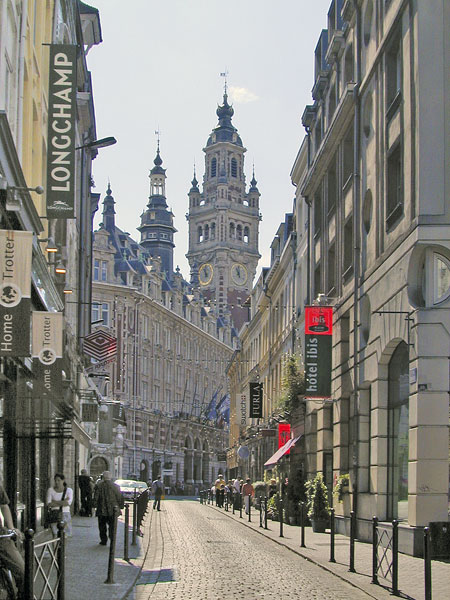 The exquisite 76m neo-Flemish belfry of the Lille Chambre de Commerce is seen towering above the buildings on this street. The Chambre was designed by Louis Marie Cordonnier and blends well with the style of such nearby buildings as the Vieille Bourse.

Below is the boxy Credit Lyonnaise tower, conceived by the architect Christian de Portzamparc as a block in the sky signalling renewal. It stands near the Gare Lille-Europe and the Euralille Centre. 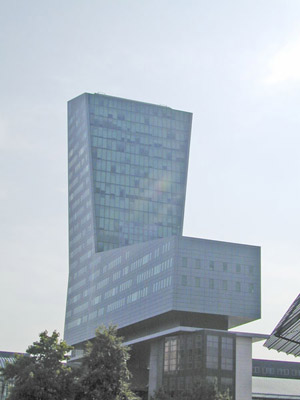 Two such different buildings, both representing commerce, both built in the 20th century, and both—to me—with their own distinctive appeal.