Back in October, I told you I was making Limoncello, a traditional drink of Italy’s Amalfi coastal area, but adapting the recipe. The traditional recipe calls for soaking lemon peel in 100% proof alcohol and after a period of time, adding a syrup of sugar and water. I find the real thing sickly sweet and so I squeezed the lemons I’d peeled and reserved the juice for the syrup. The resulting liquore isn’t clear, like traditional Limoncello because the juice makes it cloudy, but the taste is so much better.

Peel the lemons thinly—there should be little or no pith. Steep the peelings in the alcohol at room temperature for 30 days. The alcohol will take on the flavor and color of the lemons. At the end of the steeping period, strain the alcohol into another bottle. Make a syrup from the sugar and strained lemon juice. Add to the alcohol. Store in the fridge for at least 30 days. The longer it’s kept, the mellower it will be.

Serve chilled but not over ice in small liqueur glasses (it’s very potent) after a meal as a digestivo.

Walking in a buried city

When Vesuvius erupted on August 24, 79 (CE), Pompeii, a vibrant city of around 20,000, as well as nearby Herculaneum and Stabiae, were buried in volcanic ash. We have an eyewitness account of what must have been an experience terrifying beyond measure. Pliny the Elder, who was commanding the Roman fleet stationed in the Bay of Naples, saw it happen. Alerted by his sister to — as his nephew writes several years later to Tacitus — “a cloud of unusual size and appearance,” Pliny decided to set sail with the fleet for a closer look and to rescue as many people as possible. In fact he, himself, perished on the shore. “When daylight returned on the 26th, two days after the last day he had been seen,” writes Pliny the Younger, “his body was found intact and uninjured, still fully clothed and looking more like sleep than death.” The cities remained buried until excavations began in 1748. 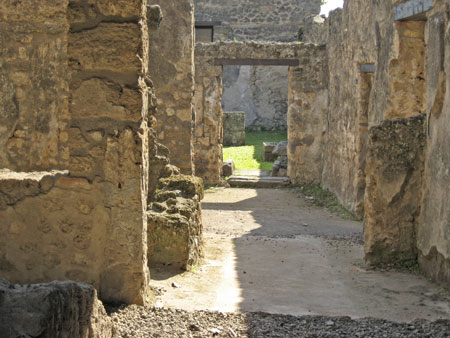 I’d seen pictures and documentaries, looked at Web sites, and read the guidebook. I’ve stood on Hadrian’s Wall. I’ve seen the stunning Pont du Gard. I’ve seen Roman remains and amphitheatres in England, France, Yugoslavia, and Italy. But nothing could have prepared me for the reality of Pompeii. You’re not seeing just one building or structure (however impressive); you’re walking along the streets of what was once an entire Roman city. You’re going into houses people lived in and shops where they bought food—complete with intact mosaic counters and deep tubs that would have held olives. You’re seeing the sidewalks they walked on and the public water fountains, fed by an aqueduct system that is surely one of the wonders of engineering, that they used on a daily basis. You’re touching stones they touched and looking at frescoes they commissioned as decoration for their villas.

And everywhere you look, you know that you are seeing what was, for so many terrified people, the last thing they would ever see. I found it breathtaking and very moving.

Signs of the times

You have to wonder about people when it’s necessary for the owner of a little shrine on the outside of a building to post this sign. It says “This is a holy altar, not a public lavatory.”

Here are two much nicer signs. The first is for a shop in Sorrento selling candy and products made from the celebrated local lemons. The second is outside a fishmonger’s shop in Amalfi.

We arrived by train from Sorrento late in the morning and made our way to the cathedral, only to be chased out after 15 minutes by the custodian. The churches in Naples close between noon and 4 PM. Since we’d planned to catch the train back to Sorrento at around four, that ruled out church visits. We decided to plan the afternoon over lunch.

Given the short amount of time we had, we decided that a tour on the open-top double-decker tourist bus would be best. We’d cover much more ground than under our own steam. The bus stops at points of major interest, and the last-but-one stop was close to the station, which was very convenient.

Naples, I think, must be city that takes getting to know—unlike, say, Venice, which captivates immediately. I’ve read that Naples is magnificent and have friends who love the city, but the little I saw disappointed me.

We felt perfectly safe—aside from the traffic, which doesn’t stop for pedestrian crossings but simply weaves around those crossing the road—but as we were walking towards the station to catch the train, something odd happened.

A trio of children of about 11 started following us. They weren’t street urchins. They were well-dressed (possibly even in school uniform), on their way home from school. The ringleader kept at us, “Scusi, signora. Scusi signore.” I ignored him because I knew from experience that if I turned round and told him to get lost, he’d start imitating me and would be even more persistent. After about half a block, he came closer, slapped me quite hard on the back of the head, and then all three little monsters ran off laughing. I wasn’t hurt, but I was taken completely by surprise.

Something similar happened to a friend of mine in Florence several years ago: She told a little girl who was begging to leave her alone, and the child hit her and ran away. It’s something you don’t anticipate. In England or the United States, young kids might give you lip, but they wouldn’t hit an adult.
————–
*See Naples and die, a phrase attributed to various people, including Goethe.

Sorrento’s most famous native son, the poet Torquato Tasso, was born in 1544. Tasso was educated by the Jesuits in Naples and went on to the University of Padua to study law and philosophy. He was only 18 when his chivalric epic poem Rinaldo made him famous. He spent many years as a poet at the court of the Este at Ferrara. His most famous work is the Gerusalemme Liberata, a lengthy epic poem (which I read at university and am ashamed to say that I remember absolutely nothing of) that celebrates the exploits of Godfrey of Boulogne during the First Crusade.

Tasso became a man tormented by religious scruples about his life and poetry. He suffered from something of a persecution mania and was, perhaps, a schizophrenic. He began to revise his masterpiece, a six-year undertaking from which emerged a much inferior work, the Gerusalemme Conquistata. Tasso died in Rome, the day before he was to be crowned poet laureate.

Much in evidence in shops on the Amalfi coast are small hot peppers (which apparently have properties beyond culinary—in several stores I saw a sign by them saying “Viagra naturale”) and lemons. These aren’t the small, bright yellow, waxed-to-a-shine lemons you see in American supermarkets; they’re large, paler yellow, often with irregular, pitted skins. Lemons in southern Italy are grown for taste, not looks.

The traditional liqueur (now popular throughout Italy) is Limoncello, beautiful to look at, fragrant, and highly potent. You drink a very small amount, ice cold (but not over ice), after dinner as a digestivo. The closest I got to Limoncello when I was in Italy was a Limoncello gelato, though I did take a bottle back for the friends with whom I stayed in London.

I don’t actually care that much for for it. Like champagne, the idea and associations are—to me—better than the reality. Part of the trouble is that it’s too sweet and not lemony enough for me. But the recipe’s simple (lemon peel, 100 percent proof alcohol, sugar, and water), so I’m making my own and taking liberties with the recipe to make it more tart. You can’t get 100 percent proof alcohol here (I don’t think) but many recipes give as an alternative 100 percent proof Vodka. I had half a bottle of 80 percent proof left over from a long-ago party, and I’m using that.

Here’s the traditional recipe (which I halved):

Peel the lemons thinly—there should be little or no pith. Steep the peelings in the alcohol at room temperature. Instructions for the time vary from three days to several weeks, but it seems to me that longer is better. (I’m going for three weeks.) The alcohol will take on the flavor and color of the lemons. At the end of the steeping period, make a syrup from the sugar and water, add to the alcohol, strain, bottle and store in the fridge for 40 days. 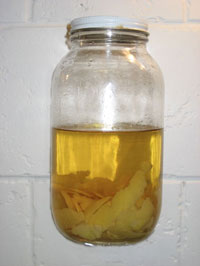 A week into the process, it looks pretty and smells wonderful. When it comes time to add the syrup, I’m going to make it with the juice I squeezed from the peeled lemons instead of water and probably cut back on the sugar. It should be ready around Christmastime, and I’ll let you know what it tastes like.

The classic view of Positano is from the sea. That’s the view that captivated me as a young teenager. I forget where I saw the photograph and read the article, but I was enchanted by the picturesque village hanging on the side of a cliff on the Amalfi Coast, a well-kept secret favored by the occasional in-the-know artist or writer. I decided I would go there some day, and more than 40 years later, I did.

We arrived by road, my cousin and I, not by sea. The bus dropped us at the top of the village. We had two options: to wait for the local bus to take us down or to walk. We chose the latter. It was a good decision, and not only because in the hour or so it took (we stopped for coffee on the way) the local bus didn’t pass us. The walk down the serpentine road to the seafront demands attention, and on the whole it’s not especially companiable. The road’s narrow and there are no sidewalks, so much of the time you walk one behind the other, hugging the wall so that the cars, vans, and fearless motorini riders don’t take you out. The seafront, when you get there, is like that of any seaside resort, and the sand on the beath is gritty and unappealingly grayish. For me, the point of the visit was the journey, not the destination. It was the walk down, passing a little school, a dentist’s office, houses, cafes, and ordinary shops, and every so often, stopping to look at the view and marvel at the buildings that seem to perch so precariously on the steep cliffside.

The whole vacationing world has discovered Positano now and it’s no longer the sleepy fishing village of the article I read. (Maybe it never actually was.) Even in October, tourists were plentiful, and the souvenir stores and restaurants were doing a good trade. But it’s still charming.