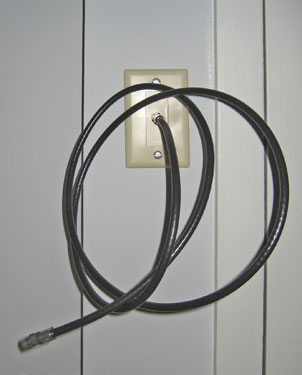 I used to have Verizon phone and DSL Internet services, but then I sold my house and moved to a highrise condominium. I planned to continue with Verizon, but after five weeks without even telephone service and with a large number of excuses for why not, I ditched Verizon and moved my phone service to AT&T. That left Internet. Verizon has somehow got the monopoly on Northern Virginia DSL service, so it’s theirs or nothing. And you can’t get Verizon DSL unless you subscribe to their voice service.

The only other broadband option is Comcast cable, which costs a whole lot more than DSL. Having no other choice, I went with that. I don’t watch TV and didn’t want the cable TV service, so up until a few weeks ago, I was a high-speed Internet customer only. Then I received a call from a Comcast telemarketer telling me that if I changed my service to the Internet and Basic TV package, I would pay $15 a month less than I was currently paying (which was a total bill of $61.10 a month).

“Wouldn’t you like to save $15?” the young man asked. The answer was obviously “yes,” and I agreed to change my service to the package deal.

Today I received my first “reduced” bill for Internet and basic cable TV services. It is for $62.91—which is $1.81 more than the total bill I was paying before.

I called Customer Service. The representative with whom I spoke gave me a bunch of double talk about how I was paying $15 less—$42.95 versus $57.95 for the Internet service, but when you added in the TV service and taxes, well … umm yes, he supposed it did bring the total to “about” $1.81 more.

So I have just written to Comcast protesting what I consider to be deceptive–or at best, misleading–marketing practices. When someone tells you that you will pay less and save money but doesn’t explain that it is for one component of the package only and that by the time you add everything together, your bottom line is actually going to be higher than it was before, isn’t the natural assumption that you are going to be writing Comcast a smaller check every month?

I suggested that an appropriate response would be a reduction to my Comcast bill of the $15 I was led to believe would be the result of my signing up for the package. I said Comcast could disconnect the TV service or not as they wished—such is my interest in it that I have not yet even bothered to connect a television set to the drop to see if it works.

If Comcast has an atom of customer relations savvy, their response will be to reduce my monthly bill by $15 and leave my basic TV service in place. We shall see what happens. I’ll let you know.

This entry was posted on Friday, March 2nd, 2007 at 7:09 pm and is filed under USA. You can follow any responses to this entry through the RSS 2.0 feed. You can leave a response, or trackback from your own site.